In February this year 2022 My Workshop went underwater which held several classic Mercedes. Amongst them was 300SEL 6.3 which I had been driving since 2008 when I had rebuilt it from a tired wreck. As I’m getting very old and the bus is getting ready to leave the bus top I decided to see if I could sell the car to a enthusiast who would use it to restore (a huge undertaking) .Well ,my attempt to sell on ebay bought forward a couple of enquiries, one of which asked just how badly it was affected,which truth be told was quite badly. But the other person known only as Walterhall 1234 decided the best chance he had to own my car was to insult me and call me names ,none of which hurt ,and I’ve struck his type before,trying to buy into something expensive by running the item for sale down. Here is the last email he sent me…as i own the car and he doesn’t and never will , I feel that he will go on through life missing out on the true joy of owning a rare Mercedes. Here is his email for all to enjoy.

“I don’t wan’t an engine I want a parts bin, like your shed on wheels, that old wet rat,
that you thinks worth nearly £18,000 pounds, with stinky carpets and milky wood with turds behind the rev counter,
with titanic rusty inner sills, that seams are rotting away like wet drowned rat, you should speak to a Texan or Arizona man they know about smart people and proper Mercedes guys, that buy 300sel shells of them all day long and send them all over the world to re-shell on rotten 300sel bodies like that rare car you made a mess of and ruined, haven’t you got a hill near your house or did you not think.?
I noticed they’re where no inside shots, bad is it, so where you going to get an interior from and original carpets from then, well you can’t, so why don’t you just do the right thing and pass it to a none invalid to fix up, I’m not interested unless it’s for peanuts, for monkey pox and that’s you, think your proper, that thing looks stupid like a clowns car chrome wheel arches are they rotten also, with them wheels, painted black, did you have a mid life crisis, things only got 250bhp my S65 got twice that, what you like, maybe you should get a shitty British car as you not capable of taking car of a classic are you?
Yeah I’m poor your right that’s why I write screenplays and live in a 3M pound designer mid century house, I’ll send you a link to youtube as I don’t really care for this car to be honest, it was a trade in on a 928 S4 i’ll crush next week, show your friends you helped to do another one in, shame buddy sounds like it’s got the parts you needed also been a 1969 original G180…”

PS,All parts for The W109 are available with a click of the mouse from lots of online vendors. And I dont think I’ll sell my 6.3. 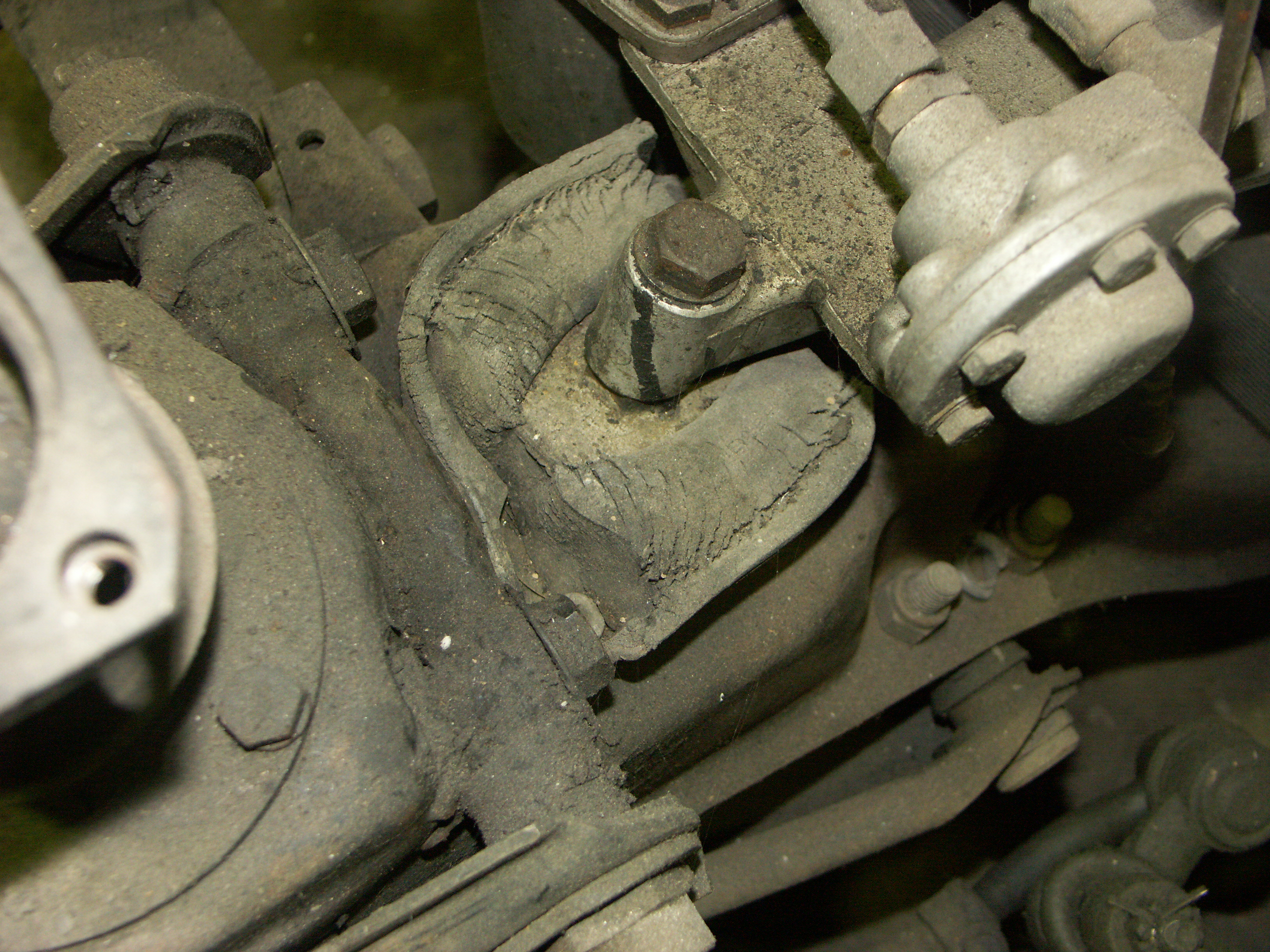 As can be seen the engine mounts were the wrong type and totally worn out . 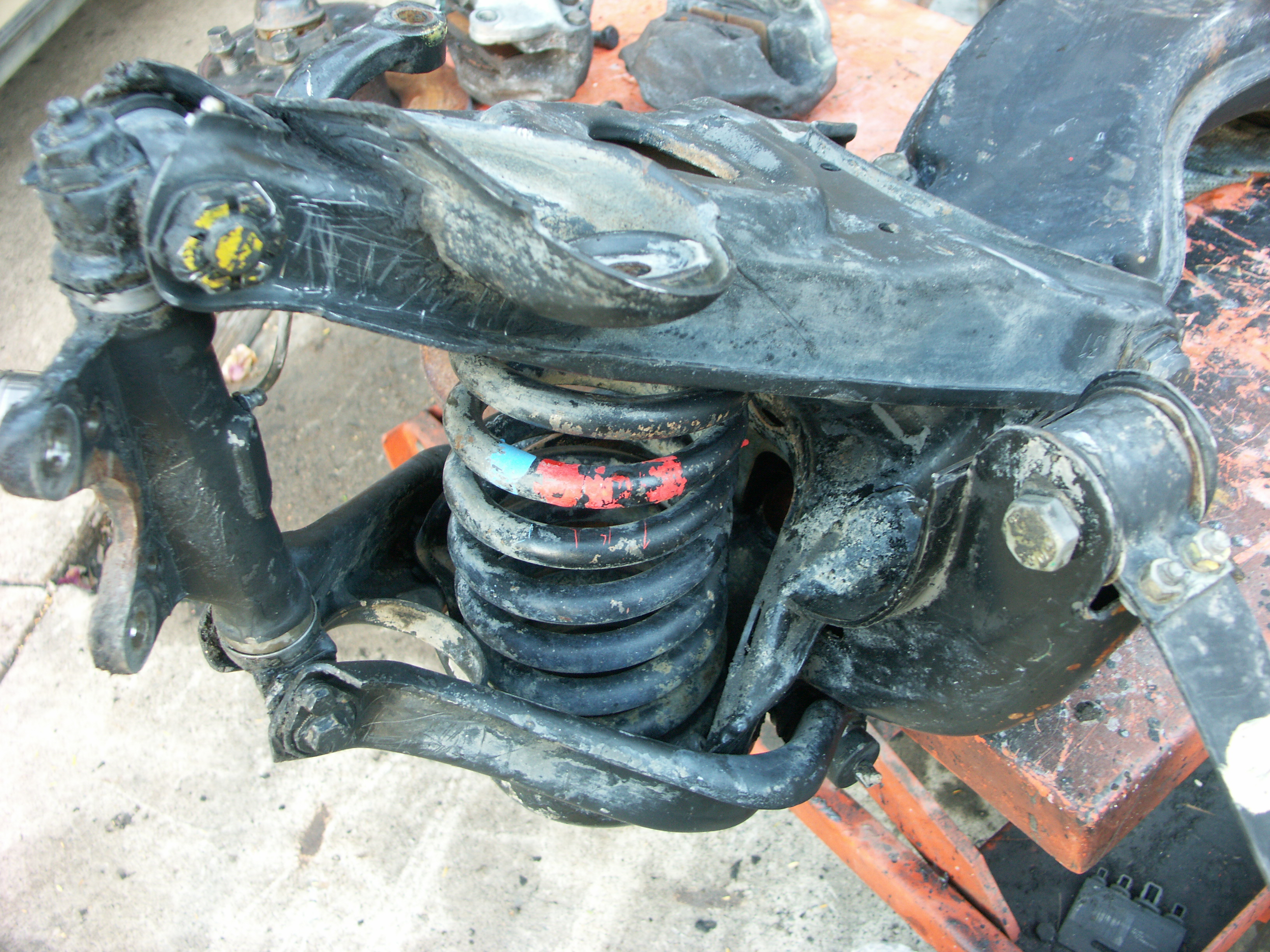 The brakes are stripped off and a note taken of the various colour splashes which indicate the spring specs, the check marks (yellow and white) for the bolts which were applied in the factory to show that the bolts were tightened correctly. 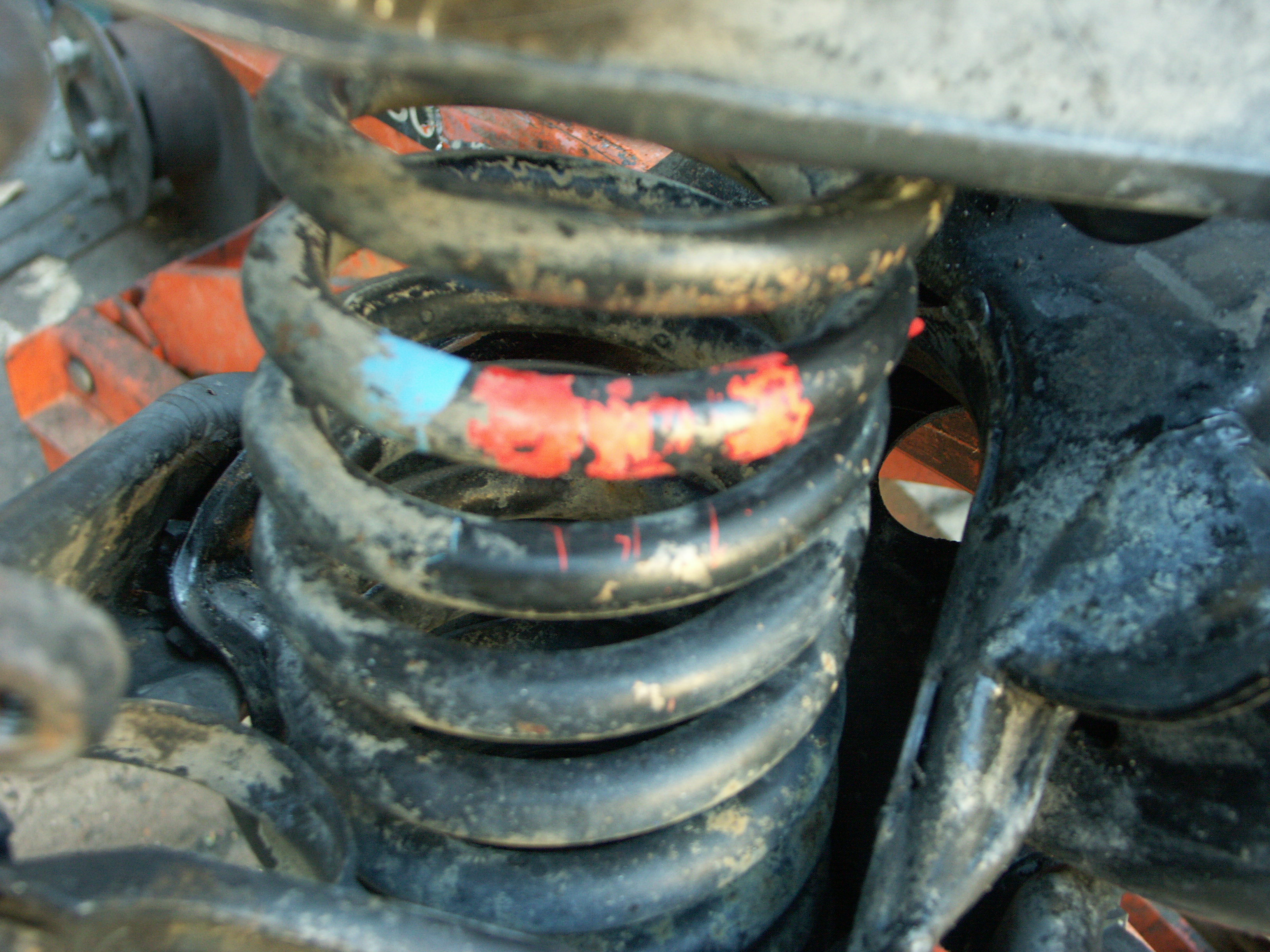 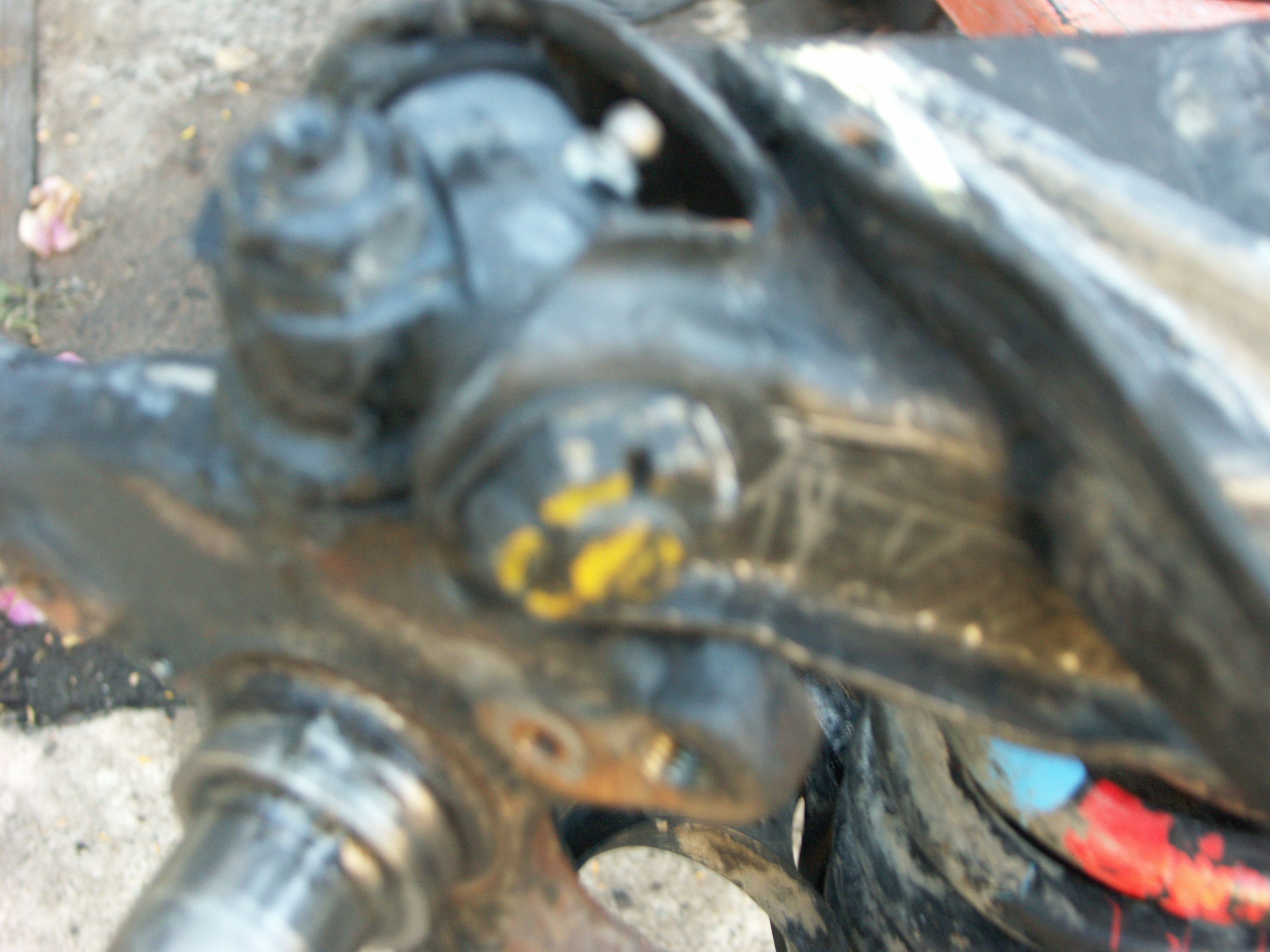 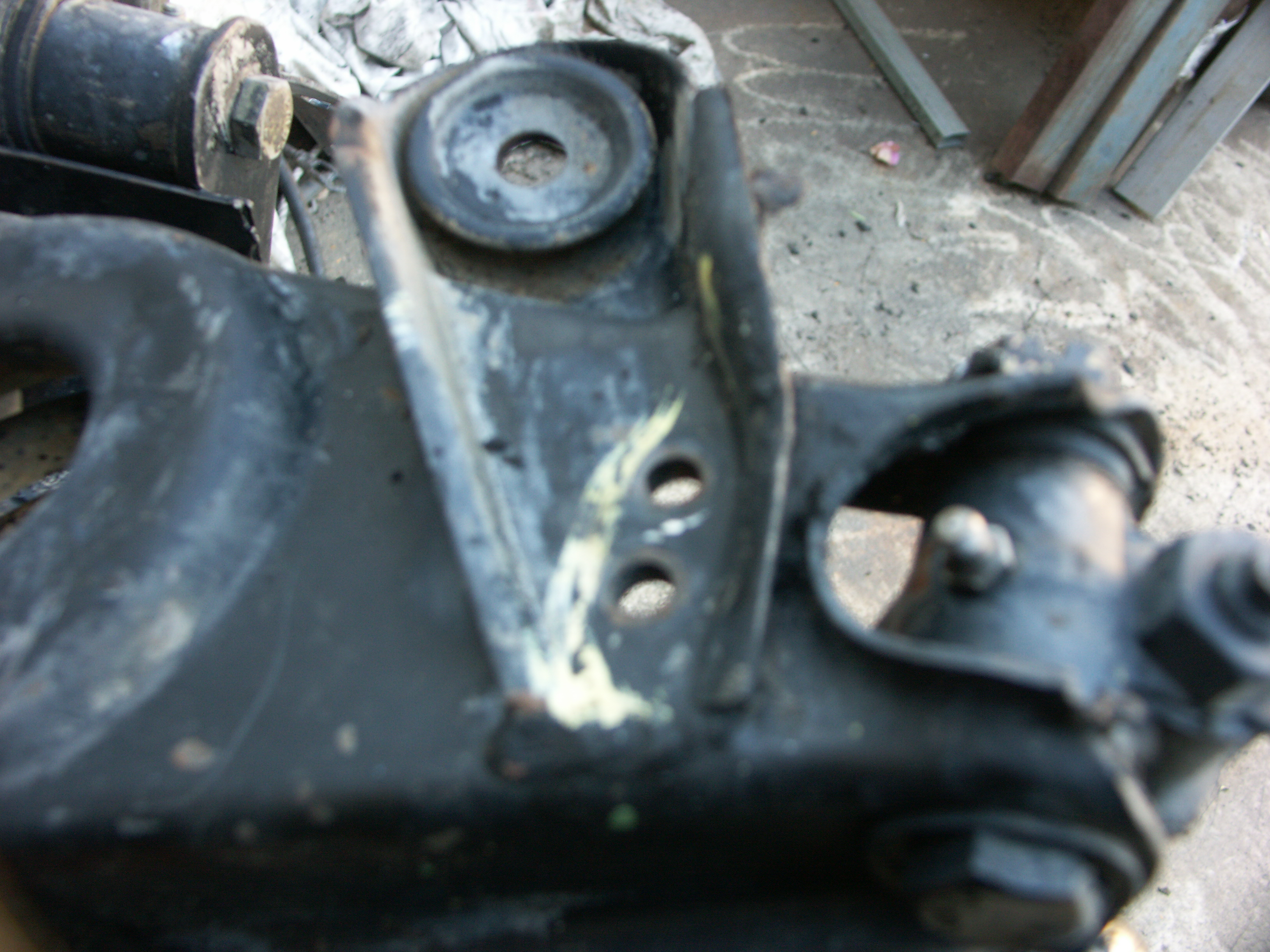 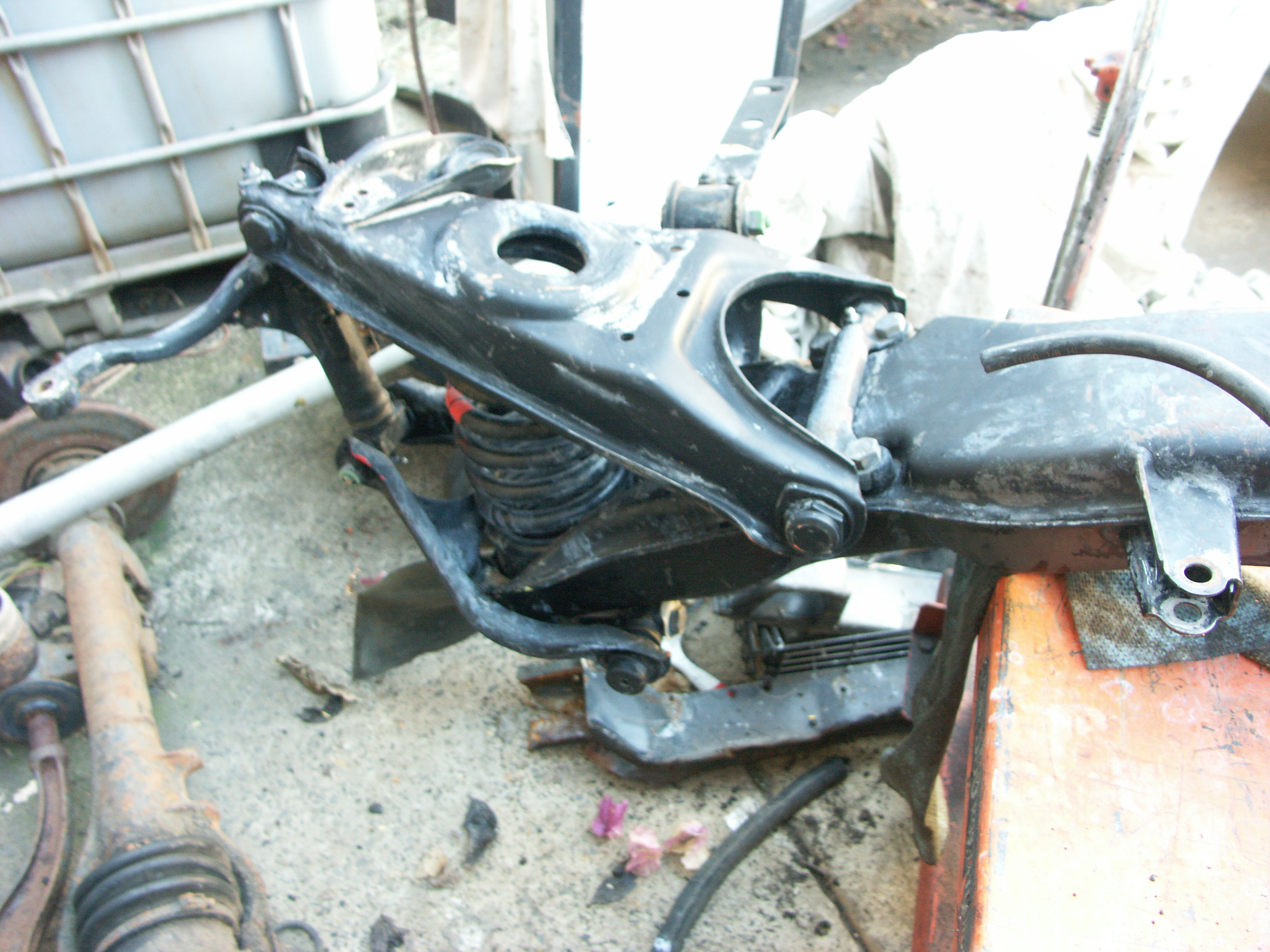 After stripping down,inspecting and repainting everything the Front axle is reassembled with new parts as required.

Front brakes have been converted to discs and the hubs are fitted with new rotors.

The various colour splashes are redone

New Brake hoses are in the red plastic bags to protect them while the front axle is reassembled.

The Bonnet has been stripped to the metal and primed several times and is at last getting smooth enough . 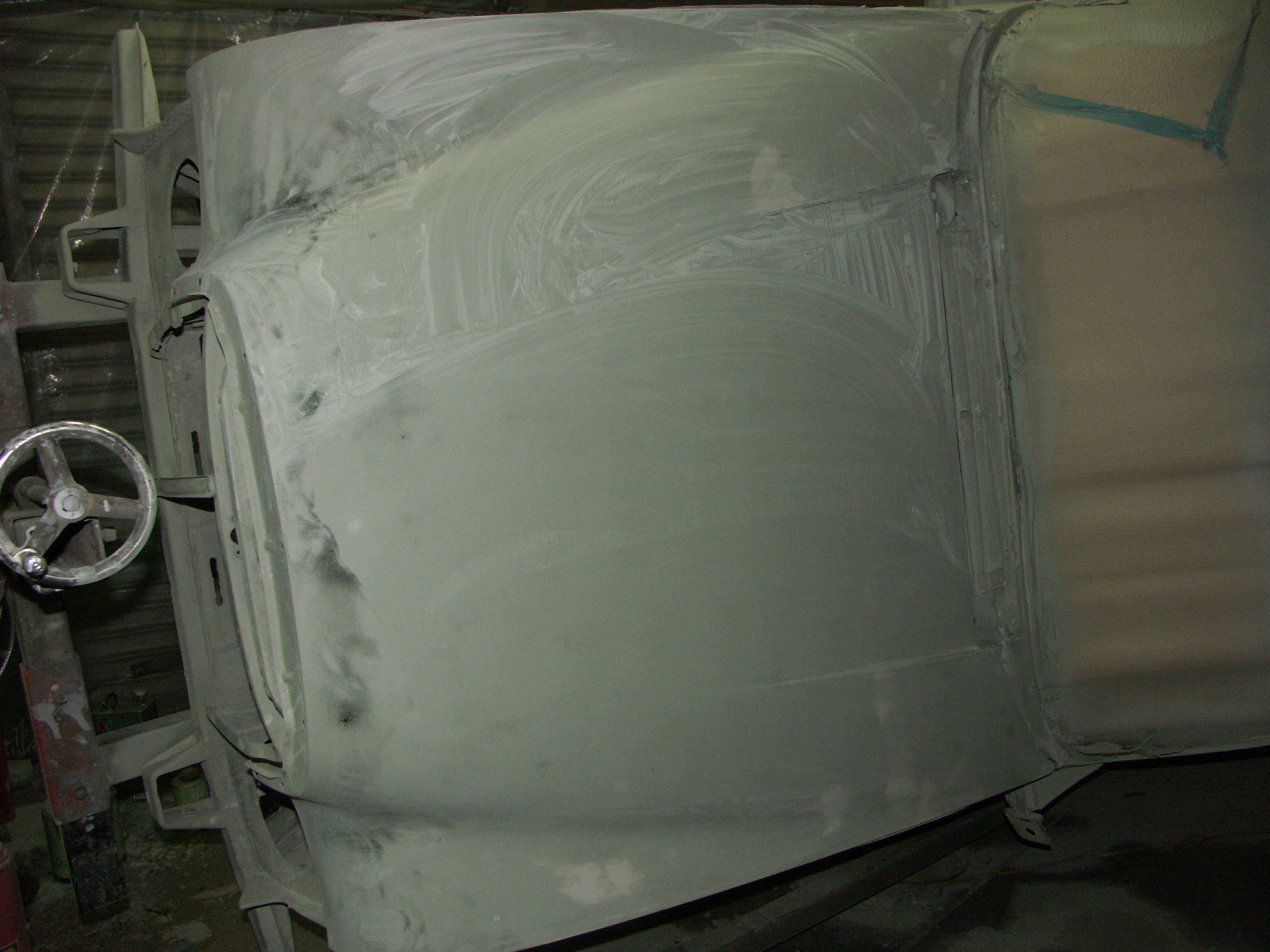 The Roof however is a different matter. It has sever damage all over it some of which i hammered out and metal finished but some is too badly damaged to completely remove so it has been leaded . The darker spots are Low spots and the lighter spots are high spots revealed in the first primer and guide coats. It’s as if someone had gone over the roof with a ball pien hammer

The boot Lid is similar but not as bad as high spots made by things being carried in the have hit the skin . In the meantime other panels are also getting the primer ,sand,Primer,Sand,Primer routine too..

The flex joint bellows on the rear axle have been replaced with a new genuine part. The homokinetic  was examined and found to be in good condition .

This is the center rear axle pivot pin. the bushes were examined and found to be in good condition .

The pinion seal was replaced as a matter of course .

After 60 years of use ,the pinion flange was showing significant ware …

The wear is repaired by the use of a SKF ‘speedy sleeve’ which is loctited in place,giving another 60 years of working life.

Given that the pinion seal and flexboot were leaking badly, the oil had contaminated the center pivot bush so this was replaced with a new item .

With the Axle and housing, center pivot and pinion flange refitted with a new nut etc , the axle will now be prepared for painting .

Front torque arm bushes will replacing  as will…

…the rear torque arm bushes which are simply cracked and hardened from the ravages of old age. . 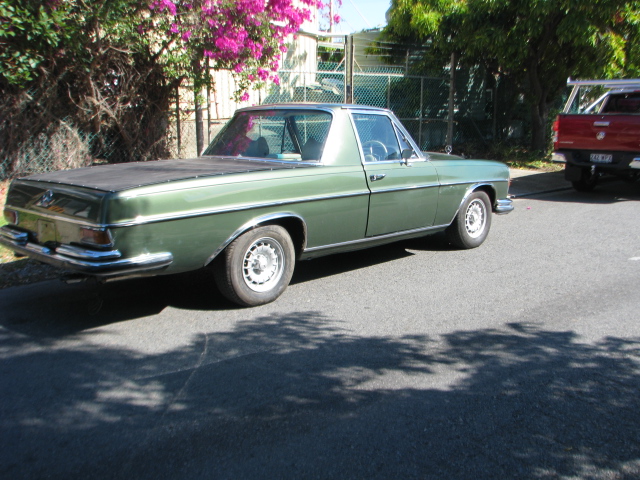 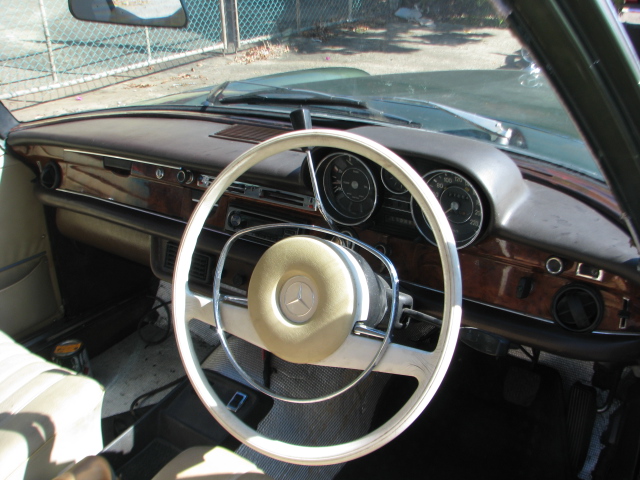 After many months of reassembly and repair work the 280SE  4.5 ute was finally able to driven and delivered back to her owner for minor finish work

Body up on Rotisserie .

The body is now mounted on a rotisserie so repairs and painting underneath can be done . 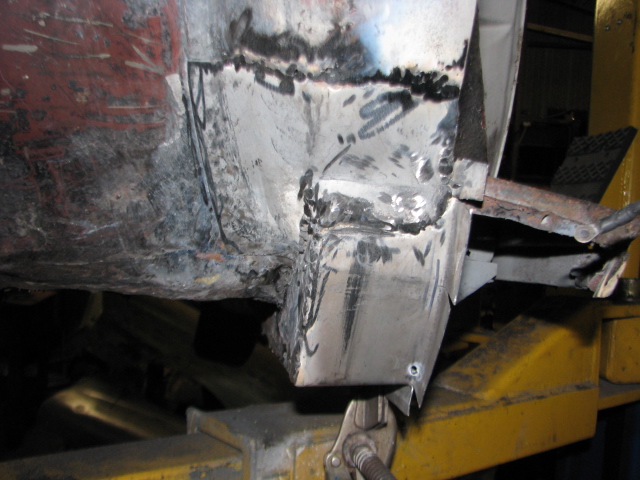 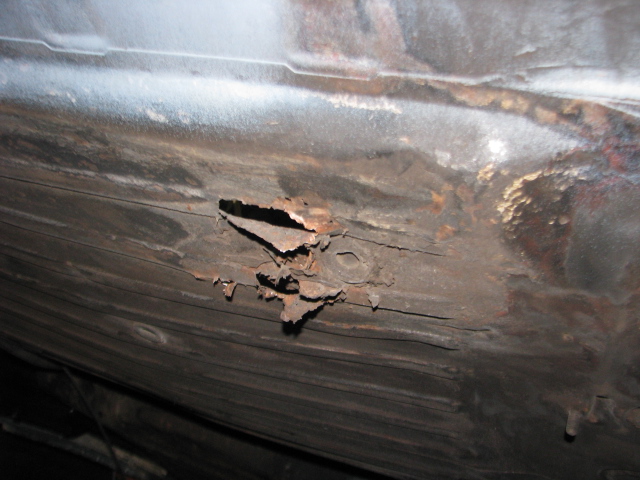 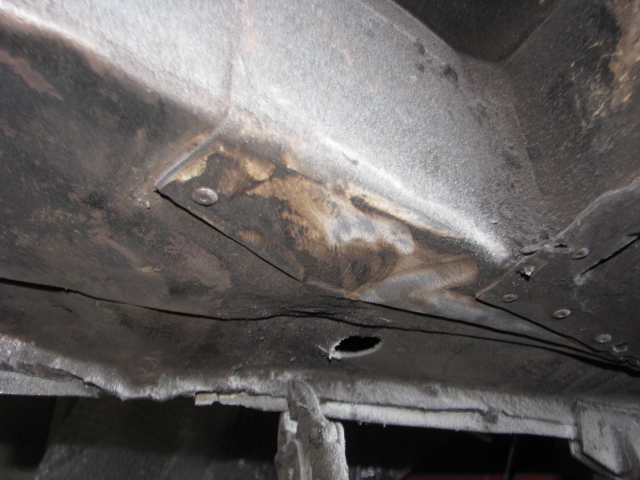 Left Chassis rail at rear has been patched in the past with piece of Steel Pop riveted in place.

Patch Removed to reveal a large rust hole underneath . A new piece of steel will be welded into place to restore the strength to the chassis section. 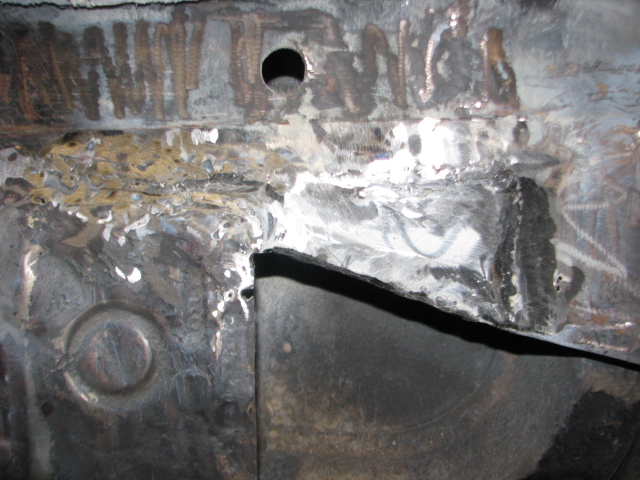 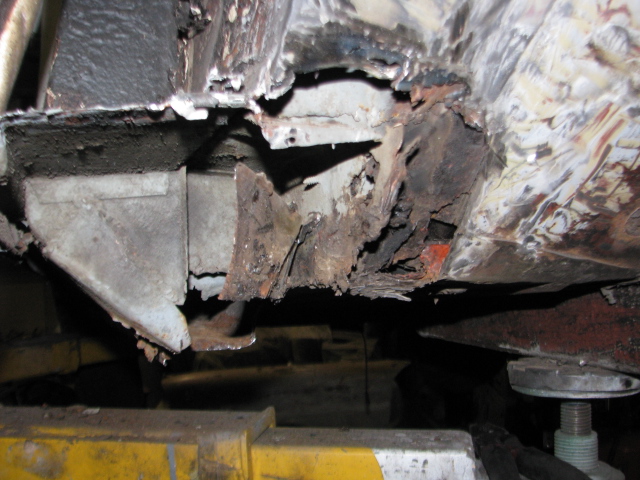 Drivers Side sill section at the Front .

this was hidden under patches and water was leaking in through holes causing more rust . 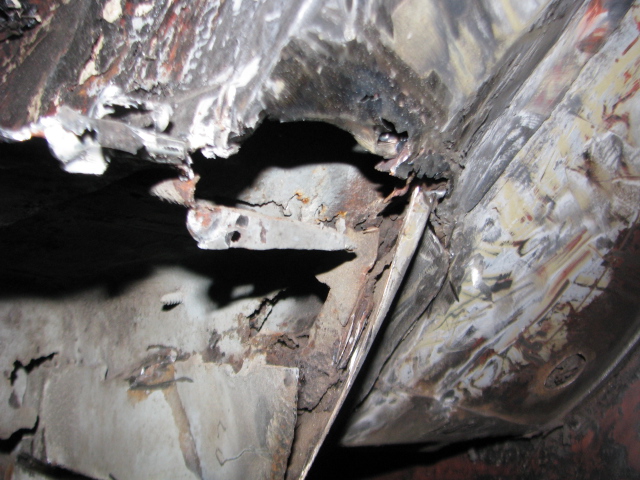 This cut out and replaced with a new part…

The part is zinc coated to prevent rust occurring in the future . 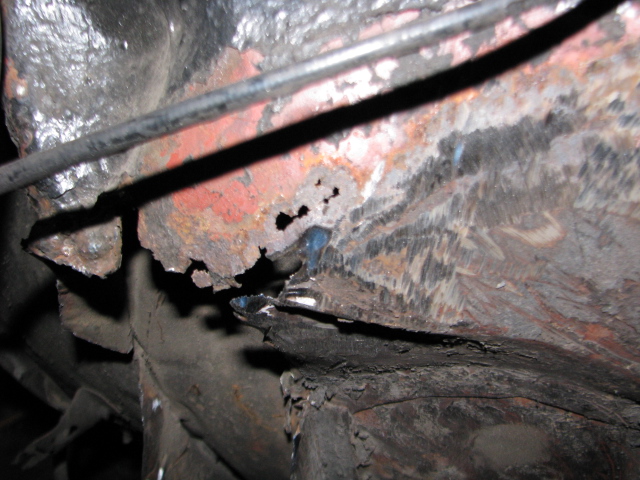 Firewall Section above the sill.

The rusted parts were all removed and new steel welded in.

The drivers side outer sill has been fitted.

The Correct shape end caps are welded into place and the new steel painted with an etch primer. 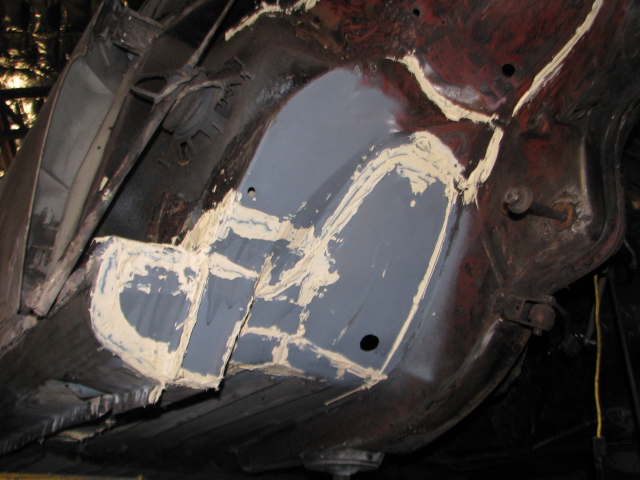 The welded seams are coated with seam sealer prior to the next coat of primer . 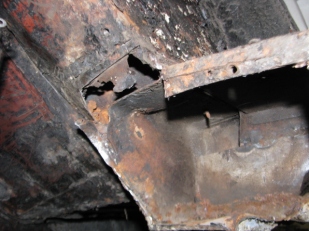 This picture shows the inner sill section where it has been patched badly in the past . This will be removed and a proper panel fitted to replace it Object sticking down in the center of the picture is the jack point…! 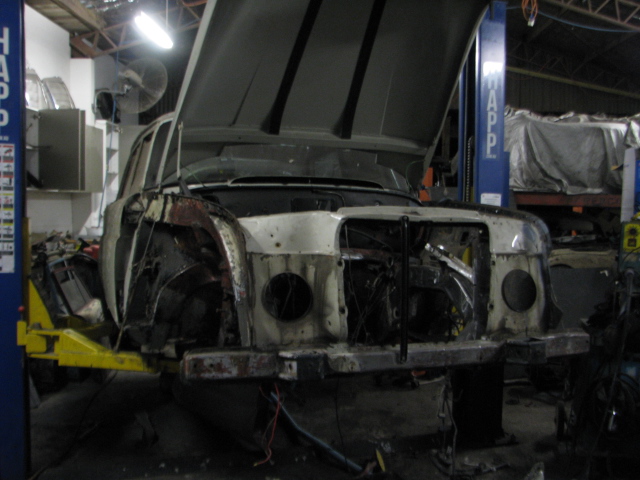 Front Guards have been removed

The guards have to be removed to replace the sills and right front one which is full of body filler.

Sill Removed on Right Side .

REmoving this part required a lot of work as the sill was 4 layers thick in places including parts of the original sill . This has created pockets of rust which has to be removed. This is the right Front corner The front end is pointing upwards where it was fitted incorrectly. This has to be removed and replaced with a correct part.

Top Part of Sill to be removed yet.

The Doors have to be removed next so the sills can trimmed off. 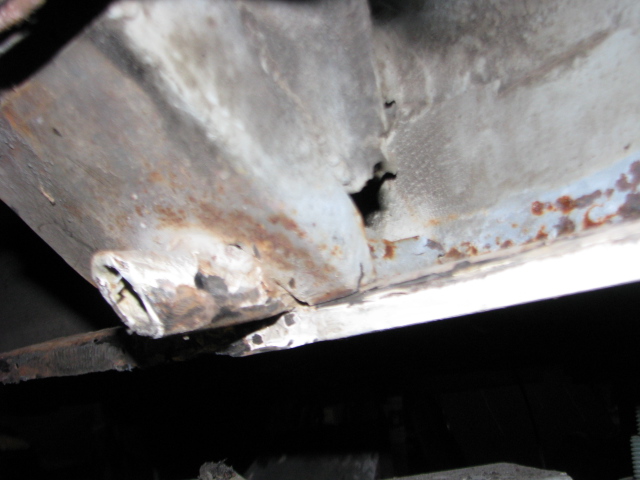 This the jack point which has also been badly patched. This is the bottom of the A pillar and has a patch on it ,again it has to be removed and repaired correctly .It’s not connected to the body at the rear ,which is a major safety issue as it can collapse if the car is lifted on the jack point.

The Doors are going to be replaced…

Because they have large amounts of filler which would have to be removed,then replaced as the car is going to be repainted and there is the real risk that the rust underneath the filler will get worse.

Again another part which was patched badly in the past and again this will be removed and repaired correctly. 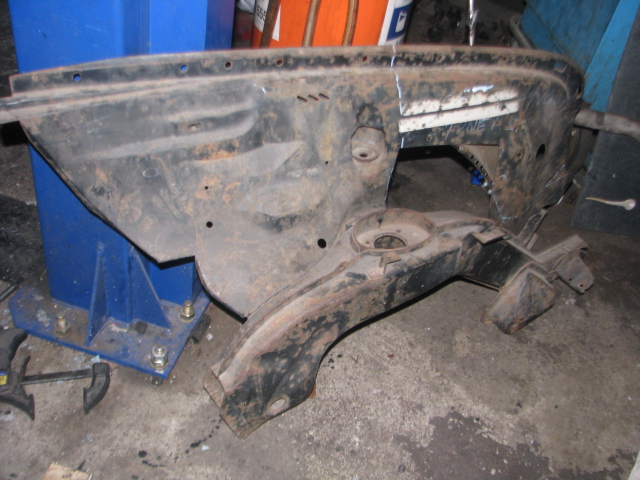 Although it is a bit shelf soiled, this part is both rare and in very good condition ,a lucky find!!. 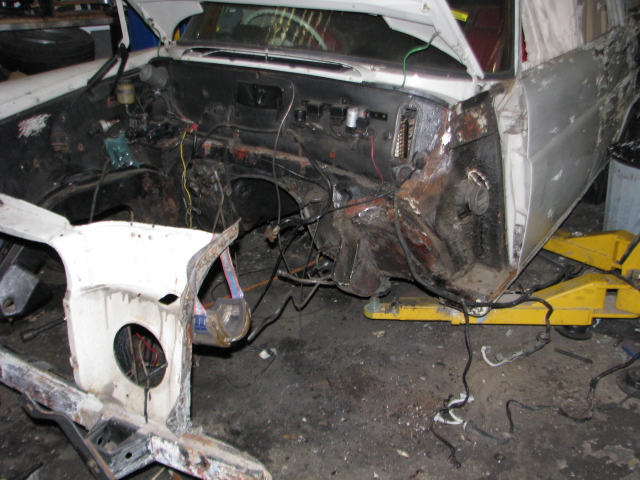 To fit the new Chassis rail, the old one has to be removed .

Some hidden damage that will be repaired, note the body filler used to hide rust holes.

The firewall has a few dents where the chassis rail pushed back against  it. These will be repaired before the new part is fitted.

Rusty damage in the firewall where the chassis rail butts up.

Rusted out section. Front guard had been welded on ….. not good!.

After Removing the Front bumpers , this tell tale was discovered, a spacer between the Chassis bumper mount and the bumper iron.  Someone had done this to allow the front bumper to  appear to sit evenly . A closer look under the car was necessary . 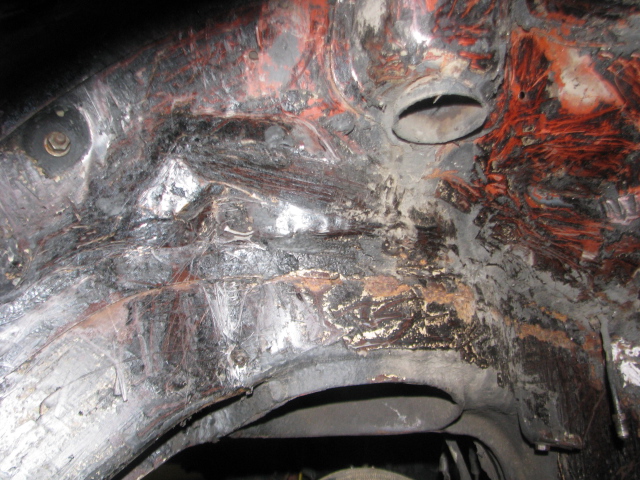 Because i intend to refinish the under side in the correct PVC undercoating I had begun to strip the bituminous underseal that had been applied in the past . This stuff causes rust rather than protect against it .  The front of the left hand chassis leg is bent backwards with a large crease in it. 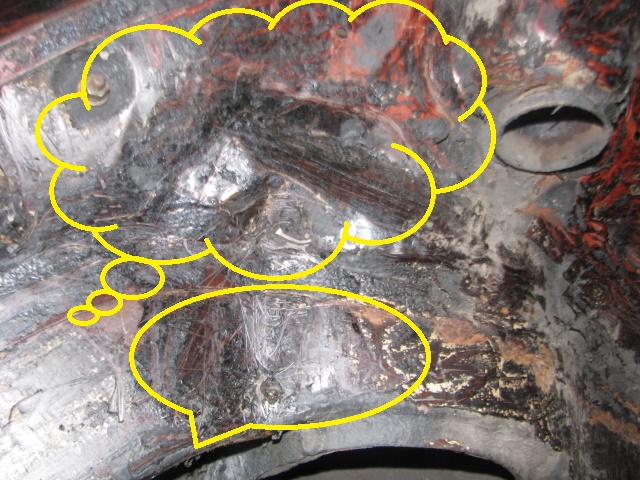 The Circles out line the easiest visible damage which had been covered with body filler to disguise it.

The Chassis leg will have to be replaced to repair the damage . 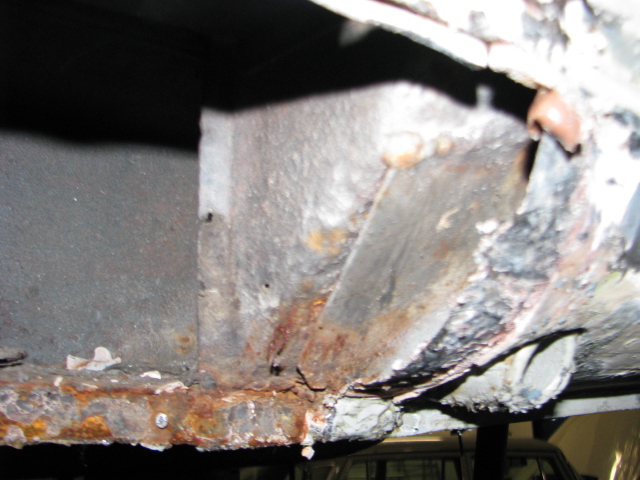 The sills on either side have been patched several times over the decades to hide rust, the one above was removed and discovered to have been held on with contact glue…..

The Circle indicates an area where the sill is 4 (four) layers thick of rusted metal and body filler with patches applied with contact adhesive. 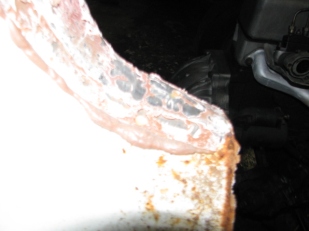 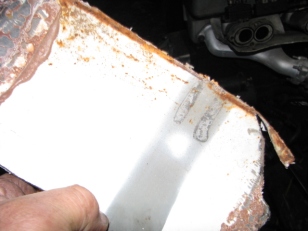 patch looks to have been cut from the side of an old fridge .

Close up of one of the patches which looks to have been cut from the side of an old fridge.