The rear panel looked straight to begin with but there was tell tail signs of body filler which was falling out. After stripping it back to the bare steel ,it could be seen tht the panel wasn’t too badly damaged , 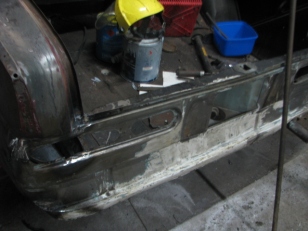 The white stuff is old body filler which will be removed.

A few small rust outs have been welded up the ring shows more filler which has been parti ally removed.

On the right side there is a rust hole which will be repaired with a patch.

On both sides of the fuel door i had to shrink out a pair of dents which had been filled. Hard to see here but it’s now very smooth .

These are the two dents i removed