recently purchased by a new owner, this is a very unusual ponton, because of it’s lime green colour . Imagine this car in 1958! I remember first seeing lime green on cars in the late 1960’s and even then it was “out there” !.

So what has to be done to this car?

The seller gave me a comprehensive list of things to be done apart from the normal service ,jobs such as replacing valve guide seals and sorting out a wiring fault to the spot lamps. First job though was to investigate the locked right rear brake. Normally a symptom of leaking brake cylinders ( the linings soak up the brake fluid making them stick to the drums)

Well both wheel cylinders were sick,one was rusted solid and the other was leaking badly. But the most concerning thing was the dodgy self adjusters which had been filled with washers.See picture 4 .  All parts are available for these fantastic cars so it is simply a matter of getting the linings fitted with new bonded linings ,which are radiused to suit the drums and the wheel cylinders reconditioned.

The 5th picture shows the nipple where the front bush of the rear torque arms mount to the body. As can be seen these are in very good condition. often,these rusted right off the chassis even when the cars were still fairly new. Mercedes sold replacement kits to fix this.

Picture 6 shows the condition of the torque arm bushes ansd the left rear shock absorber which had broken off, all have been replaced with new parts.

Picture 7 is of the brass screen in the oil filter housing. A bit of typical mercedes overengineering where the paper filter element is surrounded by a metal screen to catch bigger bits of dirt..

This car is also equipped with a hydrak automatic clutch.. basically a vacuum controlled clutch with a fluid coupler . The gear lever controls a valve electrically which uses vacuum to work the clutch via a vacuum diaphragm canister.

Torque arms,spring plates and various fasteners and washers have been restored awaiting refitting. 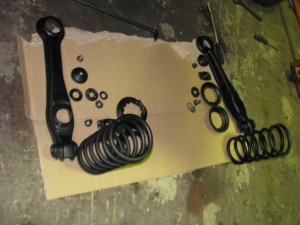